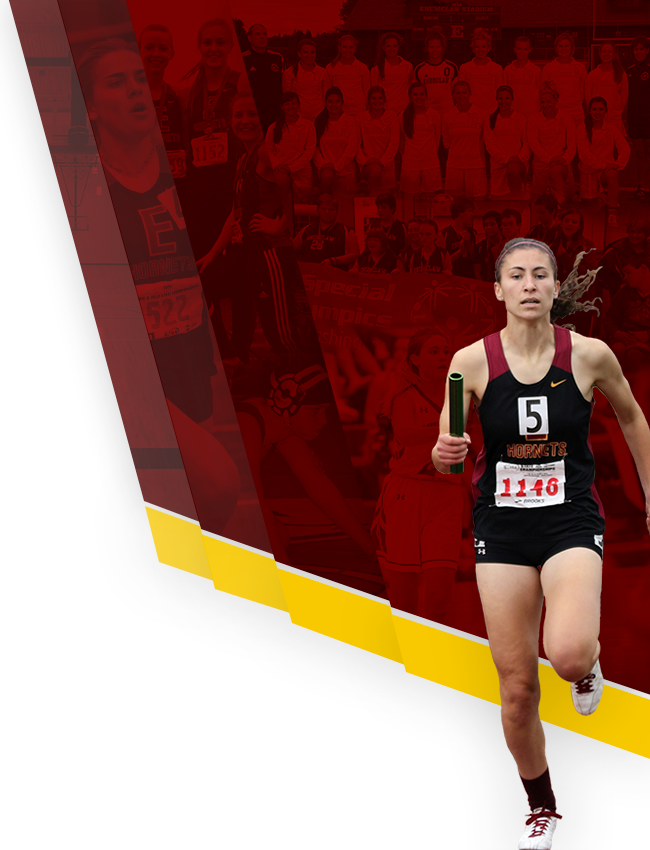 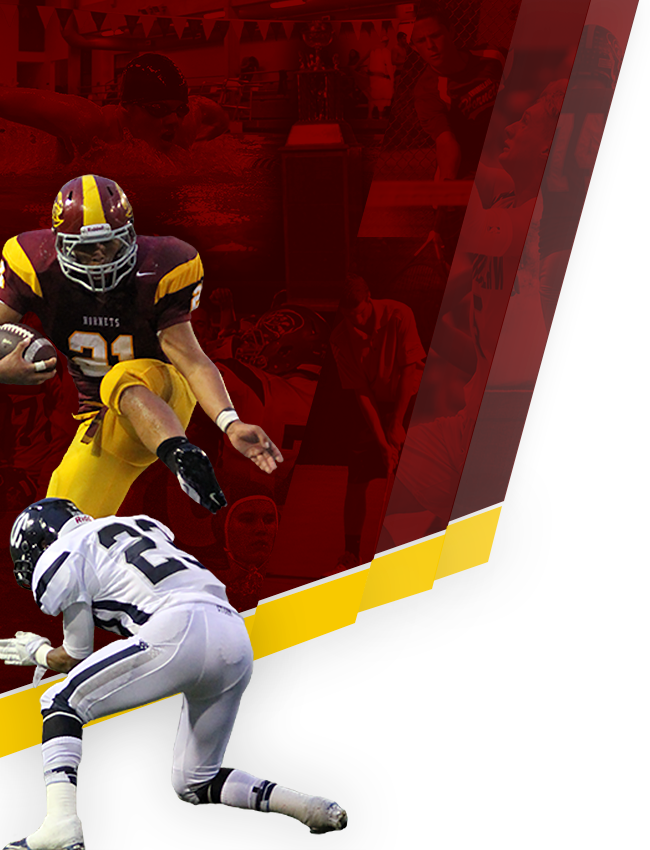 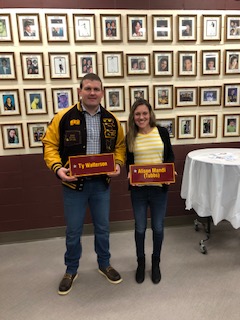 HONOR: Hornet Fans, one night each year we induct former Hornets into our Hall of Fame. This year the Hall of Fame Committee decided to focus on two state champions, Alison Mandi (Tubbs) and Ty Watterson. As I researched and pulled articles and talked to coaches I quickly realized these two weren’t just state champions, they were the best in their event / sport Enumclaw has ever had.

LEARN: If you are a current athlete – I want you to learn the essence of athletics from their stories. One had to work her way back from an injury and the other fought back after defeat and both became All Americans.

THANK: Great coaches make state champions. One of the coaches will be speaking tonight Lee Reichert Hall of Fame and the other Tim Tubbs just happens to be Alison’s dad.

Alison Mandi (Tubbs) is joined at mid court by her husband Mark and sons Nathan, Tyler and Zachariah. Mother Nancy, Father Tim and sisters Vanessa and Melanie and their families.

Alison Tubbs graduated in 2002 from EHS with numerous records and awards as a Hornet distance runner. She still holds several school records.

Her career of competition started in Australia while on a year long exchange in 1999. She won three South Australian state cross country titles; road, mountain, and club titles while also setting Grant High School records in both the 1500m and 3000m.

Returning to Enumclaw, she won the state 3200m in state record fashion with the national best time 10:11. Alison’s #1 ranking in the 3200m in the USA earned her All-American status as a prep distance runner.

In Cross Country, she dominated the National Great American Cross Country Championship race on the east coast with a new course record and the fastest 5K XC time in the USA.

On the indoor scene, she set a school record and state leading time at a national event in Baltimore in the 3200m. Her records continued on the track when she ran the 5000m in a race in Seattle with the state’s fastest time in that event and 2nd fastest all-time.

Nike and Gatorade honored Alison as the best track athlete in the state of Washington in 2001.

Following high school, Alison traveled to University of Washington where the achievements kept coming. In 2003 – 2004 she was named to the Academic All Pac10 second team. She was the top distance competitor leading the squad at 10,000 meters and second in the 5K. She came within 10 seconds of UW’s top 10 in the outdoor 5K. Finally in her first ever collegiate 5000m, she placed second at the MPSF Indoor Championships with a time of 17:14.83 which was the 7th fastest ever by a Husky.

On October 22, 1983 Mr. and Mrs. Watterson had their last child Ty or as the family called him – Bubba. Ty entered Enumclaw High School in the fall of 1998 and turned out for football and wrestling.

8th grade he went undefeated and 9th grade he wrestled 190 which is a weight dominated by older kids. He got pinned twice that year and that was the catalyst he needed to begin to dedicate himself.

Junior year he placed 2nd with a record of 33 – 1. When he lost the last round in the finals at state, he came off the mat and set his goals on winning the following year.

Ty’s vision quest included hunting for the best talent he could find including attending the National High School Coaches Open Nationals where he took first out of a group of 48 wrestlers.

Ty entered the Mat Classic with a record of 40 – 0 and of those 27 by pin and ranked top 20 in the country. At the end of Mat Classic, Ty finished 44 – 0. His final match was against two time state champion Chris Thorson of East Valley of Spokane where Ty beat him 15 – 6.

After the win, Ty did a cartwheel in front of the entire Tacoma Dome.

Ty’s simple motto: You get out of it, what you put into it. Then one of my favorite stories talks about when Ty would wrestle an opponent who had been sick for a week and a half and even though he could beat him handly, he didn’t. When asked by his father, WHAT THE HECK WAS THAT, Ty’s response was people will think more of you as a quality person than if you’re a bully.

In the South County Journal Ty was among 3 finalists Lukezic a runner from Auburn, Bonnell the QB from Kentwood and Ty for best male athlete in South King County.

Following Enumclaw, Ty went to Oregon State University where in 2007 he became an All American.

Ty is joined tonight by Mom, Dad, Sister Resa Bolton and brothers Reed and Ryan and their families.